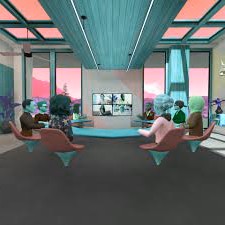 “We are working hard to create and implement future metaverse technologies to solve current business demands and reinvent how we communicate and work in a flexible hybrid world,” said Zoom Chief Executive Eric Yuan in prepared remarks.

Sales grew 35% year over year to $1.05 billion in the three months ending Oct. 31, according to the San Jose, Calif.-based firm. The company’s sales increased by 54% over the previous quarter. Its sales increased by almost 360 percent from a year before.

“We are working hard to create and implement future metaverse technologies to solve current business demands and reinvent how we communicate and work in a flexible hybrid world,” said Zoom Chief Executive Eric Yuan in prepared remarks.

Zoom’s net income increased by more than 70% year over year to $340 million in the third quarter. For the quarter, Wall Street analysts predicted sales of $1.02 billion and a net income of $337 million.

According to FactSet, Zoom predicts total revenues of between $1.051 billion and $1.053 billion for the current quarter, which is higher than the $1.018 billion predicted by Wall Street.

Zoom’s stock dropped around 6% to $227 in after-hours trade.

After the advent of Covid-19, Zoom was unable to continue the explosive growth it had when enterprises leaned heavily into remote work. Zoom’s revenues increased fourfold in the midst of the epidemic compared to the previous year.

In addition, the firm is facing rising competition. One of Zoom’s major competitors is Microsoft Corp.’s Teams product, which combines videoconferencing and other collaboration tools.

In July, Microsoft announced that Teams had hit new highs, with roughly 250 million monthly active users. Microsoft also plans to make Teams available to all Windows users as part of its next next-generation operating system.

Meanwhile, Microsoft and Meta Platforms Inc., formerly known as Facebook, are contemplating the next stages in how virtual worlds known as the metaverse may be used to create remote-collaboration workplaces.

Some investors believe Zoom’s brightest days are over unless it can discover new companies. Zoom’s stock is now worth less than a quarter of what it was a year ago. Other firms, such as Peloton Interactive Inc., which saw significant increases during the pandemic’s early stay-at-home phase, have struggled to maintain growth as workplaces and schools have reopened.

Is the Virtual World of Metaverse Better than Real Life?

Cute Pandaz is set to disrupt the NFT world

My Neighbor Alice, A New Game From a Great Design Company